The annual release of this ranking produces some rather spirited reactions in Croatia. Part of this is to do with the fact at rank 58 we’re classed as an easy rather than very easy place to do business in; in other words, we’re in the second tier, which results in either wounded pride or claims we’re going backwards because the government of the day is not doing enough to improve our lot.

The more enlightened observers will note that while we may have done something in the past 12 months to improve, other countries have done more. Given Macedonia, Montenegro and Serbia have also consistently ranked higher than Croatia in the index, there is also the usual consternation that things must really be bad here. When you drill down into the details though, the ranking provides some clear goals Croatia should aim for to improve the business environment.

The table below summarises Croatia’s performance according to the World Bank’s main criteria.

The first thing to notice is the disparity between the indicators; from the best trading across borders ranking to a derisory 159 for dealing with construction permits. So, I had a look in detail at all the indicators where Croatia performed worse than in the overall ranking.

As I have recently started a business, the 123 ranking was of particular interest. The survey results say that in Croatia there are still too many procedures to start a business, it takes too long and costs too much compared to our peer group. I paid a lawyer and notary to deal with the details and they did everything expediently and the court processed my registration very quickly too. But then it took the judge seven weeks to sign off the registration of my business; apparently the first judge went on sick leave and by the time the replacement judge got around to the matter seven weeks had passed. At least it was summer, but spare a thought for the HRK 20,000 in paid in capital vegetating all this time in a holding account waiting to be put to use.

Dealing with a construction permit relates to the construction of a warehouse. Here the time it takes to build one is actually less than in the OECD rich club of countries (146 days compared to 153.1 days) and the quality control mechanisms in place are fine. But, there are almost twice as many procedures to go through and it is very expensive. Compared to the OECD standard the cost of permits is more than seven times greater in Croatia.

To get electricity the problem is not the number of procedures nor the time, but the cost. In Zagreb, the World Bank estimates its costs HRK240,000 or 276.6% of real average annual income, or more than four times the cost for the same service in OECD high-income countries.

At first glance, it makes little sense that Croatia would be ranked 85th for access to credit. However, that is because the collateral and bankruptcy laws are sub-optimally designed compared to the peer group.

Given that the tax rate is competitive, it was a surprise that Croatia is ranked 89 for the ease of paying taxes. Indeed, the tax office scores relatively well on this indicator as the time it takes to comply with or obtain a VAT payment/refund and the time needed comply with a corporate income tax correction is better than for the peer group. Yet, the number of tax payments per year at 34 on average is more than double the amount in Europe and Central Asia or in the OECD high-income bracket of countries. The time spent each year paying taxes is also too high compared to OECD countries.

Although the ranking, at 59, is the closest to where Croatia is overall, perhaps the most damning details are hidden in the Resolving insolvency category. In a nutshell, compared to the OECD, on average, you recover half as many assets, having spent 80% more time and 50% more money trying to do so. The kicker is that Croatia’s insolvency framework is judged marginally better than the OECD club of wealthy nations! In other words, the system is well designed, but the court experts, judges and administrators are poor in comparison.

The table below summarises these results: 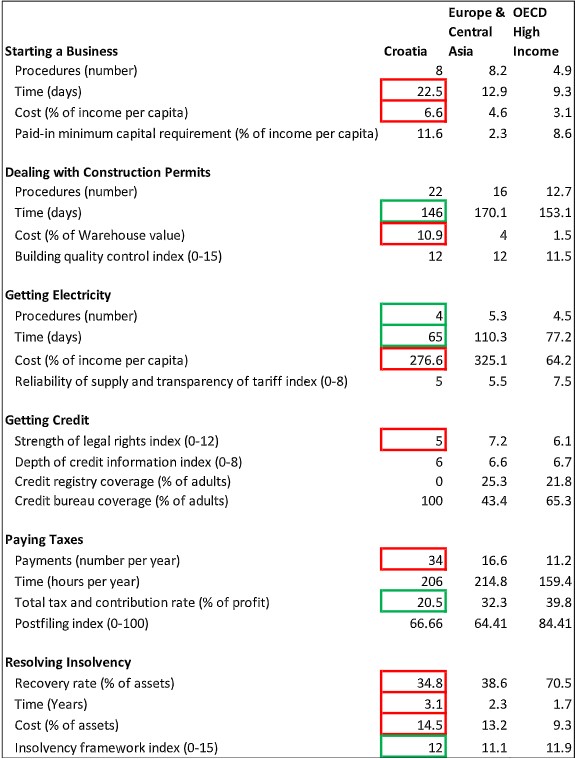 The first conclusion is that not all is bad in Croatia. The legal framework in a number of areas where Croatia does relatively poorly overall is actually quite good (e.g., the insolvency framework and the building quality control framework). Where things really fall down is in the implementation of the rules. The second conclusion is that the cost of many public services is too high (and by many orders of magnitude, at that). The monetary cost of starting a business, getting a construction permit and getting electricity are all much higher than what is the case in OECD high-income countries, which makes no sense. A related issue is that in terms of time, it takes too long to start a business or to complete an insolvency proceeding. To be fair though, Croatia does well in terms of the time it takes to get electricity and build a warehouse.

The performance of the court system is far from flattering judging by this year’s Doing Business 2019 survey. Even worse for them, they really cannot claim the legislation and by-laws in areas such as insolvency resolution is substandard. More can certainly be done to simplify the number of procedures and the cost of starting a business. State-owned companies and agencies involved in ensuring access to electricity and issuing construction permits should also be required to explain why the cost of their services is so high compared to the wealthiest nations on earth. Best of all, these do not seem to be insurmountable obstacles to a better business environment. Rather, the conclusion is surely that governments, both national and local, need to focus on what is driving high costs and poor performance and to root them out.