Compared to the global financial crisis in 2007/2008 the economies of Southeast Europe are recovering more quickly. In truth, this is a completely different crisis, brought on by the pandemic and with all economies of the region now more resilient after varying degrees of adjustment post-2008. In that context, it makes sense to ask what 2022 holds in store for the region?

As ever, the international environment will be crucial

We start, as ever, by considering the international economic environment. Monetary policy since the pandemic has sought to provide adequate resources for the economy to deal with the fallout. Stock markets continue to test new highs, benefitting from those same resources. Despite the fireworks at the start of January, the bond market continues to signal slow longer-term growth and weak inflationary pressures. The US Dollar is strengthening, which is always a sign of potential funding market liquidity issues. And the impulse to global growth from pronounced US fiscal policy support will be much smaller in 2022.

Yields on longer-dated US, core EU member state and Japanese bonds are all low. Yet, for the region specifically, rising Italian bond yields are another concern. Italy’s economy is important to Southeast Europe given the country is the largest trading partner to Slovenia, Croatia and Albania. Rising Italian bond yields are the result of expectations the European Central Bank will wind down its support for eurozone economies gradually this year. Rising Italian yields (and those of other eurozone periphery members, Spain, Portugal and Greece) mean that, apart from Slovenia, all other economies in Southeast Europe face rising costs of borrowing.

In general, external funding costs for most of the region look set to increase in 2022 compared to last year. And this comes just as the main central banks in the world look set to tighten monetary policy. Because of inflation.

Inflation in 2022 will be higher on average

As inflation has picked up in the region in the second half of the year, the so-called carry-over effect will be significant in 2022. That means that even if we have no inflation from month to month (January compared to December, February compared to January and so on) for the whole of 2022, the average inflation rate will still be higher compared to 2021. How much higher will depend on not only energy and food prices. Higher inflation, especially for items such as food and energy, reduces disposable income for spending on other goods and services. And fiscal policy support for the economy will progressively wane. Wage growth in a region characterised by labour shortages and mismatches will limit this effect. Yet, personal consumption growth rates which would sustain higher inflation in the longer-term seem unlikely and are not part of our central scenario. 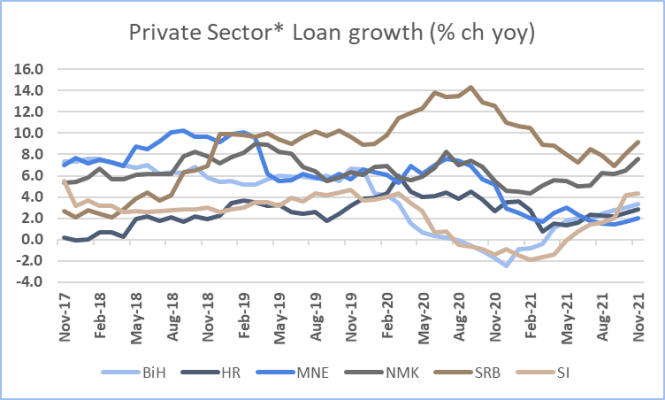 * Domestic loans to households and enterprises 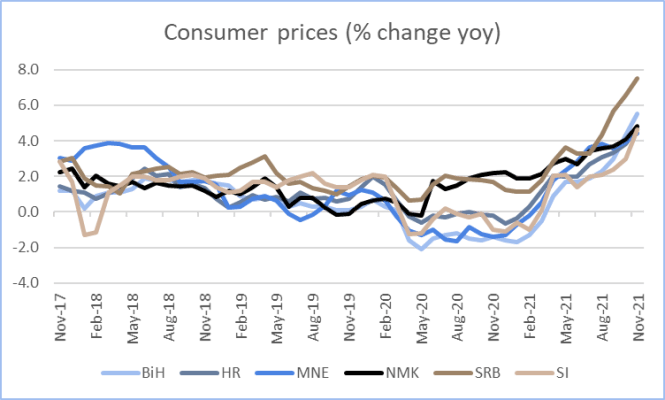 Where to look for signs of stress?

Looking to 2022, if some of the risks to global funding markets materialise, countries with current account deficits in the region are most at risk of adverse effects. Serbia and Montenegro are the prime candidates here. Bosnia Herzegovina and North Macedonia also have current account deficits, but Montenegro’s and Serbia’s banking sectors also have aggregate net foreign liability positions – only the Serbian banking sector borrows money from abroad to finance domestic credit expansion, while in Montenegro, non-resident deposits drive the net foreign liability position.

The EUR/RSD exchange rate will be worth watching for any signs of global financial market stress flowing over into the region. While many emerging market currencies have been under pressure in 2021, the currencies of Eastern Europe continue to benefit from association with the euro (and swap and repo lines with the European Central Bank). Any tightening of domestic liquidity conditions by the National Bank of Serbia would signal increased risk of currency weakening.

The risks are not all negative, however. Namely, in the context of deglobalisation and the shortening of supply chains, the region, which largely missed out on the expansion of production capacities to Central and Eastern Europe, stands a good chance of attracting some activity. This admittedly is a longer-term opportunity rather than something we expect this year, but something worth keeping in mind.

Croatia to make the biggest strides in EU integration in 2022

As counterintuitive as it may seem, you read that heading correctly. Croatia is, after all, an EU member state since July 2013. And Serbia in December opened Cluster 4 negotiations with the EU, marking the end of a two-year hiatus in accession progress. North Macedonia may benefit from a new government in Bulgaria unblocking the commencement of its EU accession talks. We are in the “We’ll believe it when we see it camp”. We see no progress for Bosnia Herzegovina in 2022 (again) while Montenegro may also make progress.

Yet, it is Croatia which is making preparations to join the euro area in 2023. In addition, in December 2021, Croatia received assent from EU Ministers of Interior that it is ready to join the Schengen free movement area. There is a chance that during the French presidency of the European Council in the first half of 2022, Croatia’s accession process for Schengen may end successfully. An early summer scenario of confirmation dates for Croatia’s entry into the euro area and Schengen in 2023 is a possibility. Even euro adoption alone would move Croatia institutionally closer to the core of the EU. Joining both structures would see Croatia institutionally ahead of Poland, Hungary, Romania and Czechia.

Elections in half of Southeast Europe and perhaps more

In addition to global economic challenges, half of Southeast Europe faces elections this year. April will see both Serbia and Slovenia go to the polls. Slovenia’s is a regular general election as the current parliament’s term ends. Serbia will have an early super-election encompassing presidential, parliamentary and local elections. Bosnia Herzegovina’s general election is set for October 2.

Slovenia’s atomised political scene means it could take a while to form a government. Yet, things will continue to function. For the rest of the countries mentioned, the period leading up to elections and forming a government is lost time. Namely, they are all to various degrees in EU accession talks. Or seeking international financial institutional support which need government decisions to progress. The potential for private sectors to delay investments until political clarity prevails is therefore larger.

In some ways, the outlook for 2022 is more of the same. A non-disruptive international environment would ensure growth in all economies. Countries in the EU can look forward to more support than those outside. The main differences are indeed in the EU integration space. In this sense, Slovenia is economically solid heading into a general election year. Croatia in 2022 should make significant institutional strides (euro and potentially Schengen). Meanwhile, the rest of the region remains a distance from membership and still needs to figure out what it wants.