Image by geralt from Pixabay

At the third time of asking, Brexit finally occurred on 31 January and the UK, having left the EU, now finds itself in a transition phase which, quite conceivably, could end as soon as the end of this year. A few days later, on February 5, the European Commission announced proposals for a revamp of EU enlargement procedures, with those countries of South East Europe not yet in the EU specifically in mind.

There are many ways Brexit will affect the remaining 27 EU member states, large and small. How the remaining member states view the EU will also be influenced by what happens to the UK outside the EU. I remain convinced that diverging from one’s closest and largest trading partner will have adverse long-term effects irrespective of the opportunities freedom of action confers.

There are other threats facing the UK because of Brexit. Scotland voted strongly to remain in the EU. Northern Ireland voted in favour of remaining too, but not as numerously. In any event, they find themselves outside the EU against their voters’ wishes. Scotland has revived demands for a second independence referendum. Should the ruling SNP perform as well in the 2021 Scottish elections as it did in December last year in the UK elections, that pressure for a second referendum will only increase. Add in evidence of English views they would be better off without (subsidising) Scotland and the ability of PM Johnson to continue rebuffing Edinburgh’s requests will get harder.

A vote for independence would end the UK as we know it. Surely all bets would be off in respect of what happens with Northern Ireland. More importantly, the strategic coast Scotland occupies bordering the North Sea would no longer be British. What happens to the UK’s Trident nuclear deterrent, stationed in Scotland, would surely become a major issue of negotiations involving not only Edinburgh and London, but Washington D.C. and Brussels,at a minimum.

The point is, the UK’s decision to leave the EU has opened up a number of defining issues, not least the survival of the UK. Joining the EU may involve transferring some sovereignty to the EU, but in the UK’s case it is not hard to imagine a situation where the choice to leave the EU leads to a dissolution of the entire state.

As the UK leaves, other nations are hoping to join

Meanwhile, the rut the EU enlargement process has become for South East European hopefuls, has seen the European Commission propose changes to the process in early February. This new approach largely considers France’s proposals to reform the accession process. As France alone blocked the commencement of accession talks for North Macedonia (and Albania along with other states) in October 2019, this is important. If accepted by member states, this would increase the likelihood of North Macedonia and Albania commencing accession talks this year. And, the EU’s enlargement policy would gain credibility.

The new enlargement approach, by focussing on clusters, with fundamentals (rule of law, economic criteria and administration reform) aims to motivate candidate countries to implement the most critical reforms. In return, candidate countries accelerated integration and phasing in of EU policies. At the same time, backsliding on reforms risks seeing the accession process starting from the beginning.

Montenegro and Serbia, which are already negotiating accession can join this process if they choose. The first countries to be exposed to this new enlargement approach will be Albania and North Macedonia, when they commence negotiations. Member states will be more directly involved in the process, which, as we have seen with the French veto in October 2019, can cut both ways. By the time of the Zagreb Summit on May 5-7, EU member states will hopefully have approved the new approach to enlargement paving the way for North Macedonia and Albania to commence talks.

Croatia as an example of the benefits of EU enlargement policy?

Meanwhile, if the rest of South East Europe considered Slovenia too advanced relative to them to be representative, Croatia, as the 28th member of a 27-member club has quietly been demonstrating the economic benefits of membership of the EU. It has recorded approximately 3% real GDP growth over five years while all sectors of the economy deleverage, exports rise and private consumption grows. Many issues remain to be tackled to stop emigration and the (too) prevalent feeling of lack of progress, but at a minimum we should be able to agree 3% growth with surpluses is a far better achievement than 4.5% growth with rising external imbalances, as was the case in the era to 2008.

Precisely because of its febrile neighbourhood, small size of its economy, nascent institutions and need for policy anchors, Croatia decided to join the EU. Indeed, if one considers the past 500 years of Croatia’s history, rather than only the period from 1918, joining the EU was a logical step reuniting us with the nations of Central and Eastern Europe with whom we shared centuries together in jurisdictions such as the Habsburg Empire and the Austro-Hungarian Empire. Viewed from this perspective, Croatia’s decision to join the EU was a natural progression.

Namely, life on the border, as Croatia’s history has demonstrated numerous times, is not an easy existence. It is no coincidence that Croatia’s first economic renaissance occurred in the late 19th century when the Austro-Hungarian Empire had possession of Bosnia Herzegovina. This was when Zagreb’s lower town and most villas dotting its hills were constructed, Slavonia got a new lease of life and the first inklings of industrialisation occurred in the Dalmatian hinterland. It should also come as no surprise that together with Slovenia (which also has extensive business links in the region), Croatia has been championing EU expansion to the rest of South East Europe. EU enlargement to the south and east is in both countries’ interest.

The UK and countries of South East Europe cannot be compared

Clearly, the UK and countries such as Croatia cannot be compared. The UK is much larger, wealthier, has a far better strategic position, much longer democratic traditions, experience in running an empire (and dealing with its decline), developed institutions and a world class legal system. To that end, the UK, unlike South East Europe and large parts of Central and Eastern Europe, does not need EU membership to enhance its institutions. But, as we have argued, that does not mean the UK has not exposed itself to a new set of risks by leaving the EU. 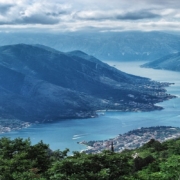